What is Solar Energy and How Does it Work? | Green Life Zen What is Solar Energy and How Does it Work?

What is solar energy? It is simply, the energy that is produced by the sun which forms as a solar radiation and can possibly generates an electricity power. In order to produce an electricity, we need photovoltaic, PV and cells to support the solar energy. 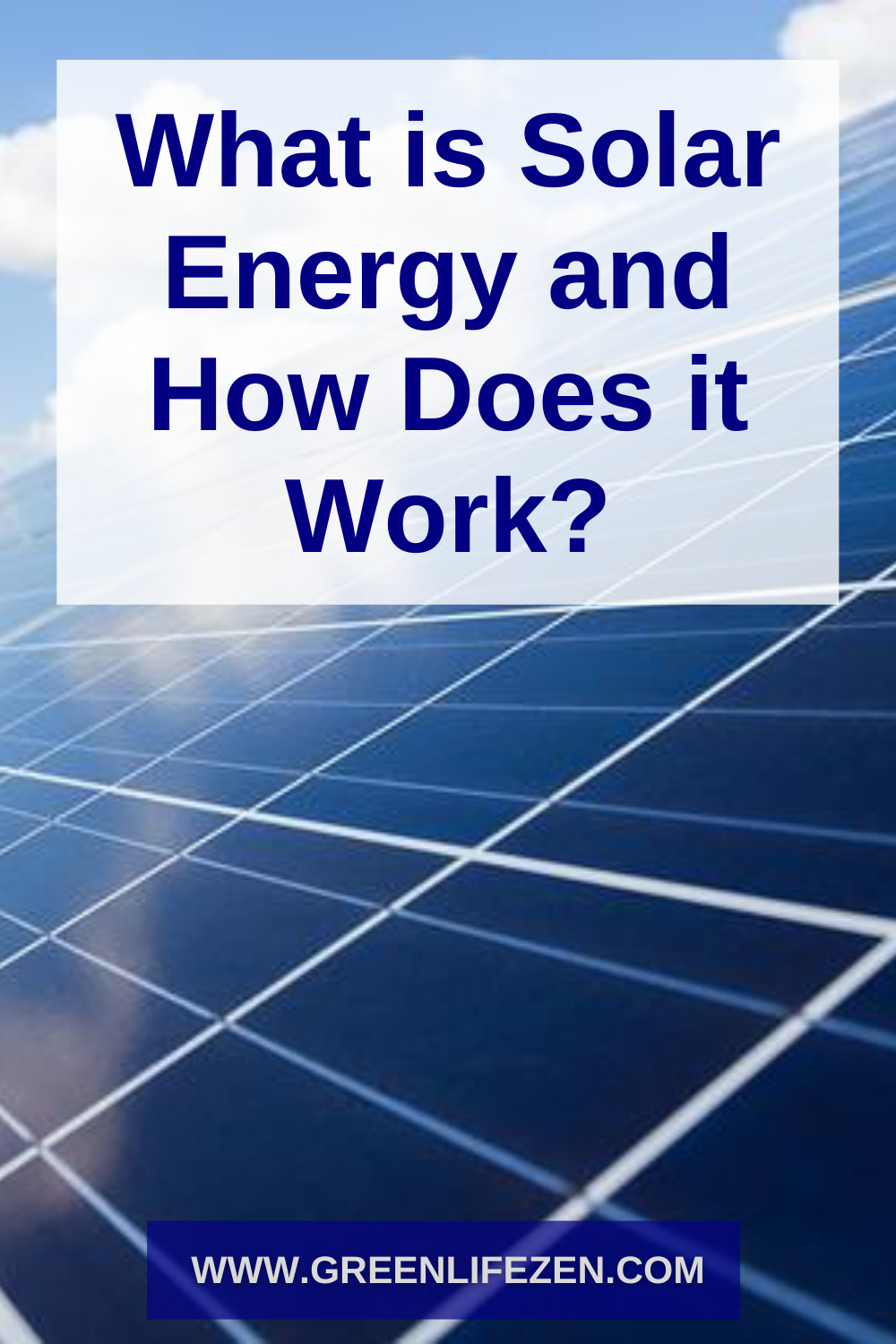 These cells are made from materials which represent the “photovoltaic effect” i.e. when these PV cells hit by the sunshine, the electrons in cells are excited by the photons of light and get them flown to finally produce electricity.

Related Article: 7 Simple Steps on How to Build Solar Panels

The use of PV panels has increase both in the city and in remote locations. They are used to generate electricity for home need, schools and communities, and to provide electricity power for so many equipment such as water pump and telecommunication.

Photons travel about 93 million miles from the source to the earth in a period of about 8.5 miles. Each hour the impact of photons on the earth surface generates enough energy to meet the needs of global energy needs of the whole year.

Photovoltaic cells account for about 5 to 10% of the energy used in the United States. The solar technology is on the increase, and the cost of installing solar panels keeps on dropping. The ability of humans to harness the energy from the sun is on the rise.

Research from international energy agency reveals that solar is the leading growing source of power. Solar energy has surpassed all other forms of energy in its growth rate. In the recent future, humans will be enjoying the benefits of solar energy in different ways. The solar panels work in such a way when the photons from the sun hit the cells; they knock loose the electrons from the atoms. When conductors are attached to negative and positive sides of the cell, they form an electrical circuit.

Electrons flow through the circuit to generate electricity. Several cells build a solar panel. You can connect several panels to form a solar array. If you deploy several panels, you can end up generating a lot of energy for home use or even business needs.

The solar panels are made out of several solar cells. The solar cells are designed out of silicon such as semiconductors. The construction alternates positive and negative layers to create an electric field. The formation is more like a battery.

How Do Solar Panels Generate Electricity? Direct current electricity is generated by solar panels after the photons heat the cells. Electrons flow following one direction to form the DC. They move from the negative side of the battery to the positive terminal.

The electrons pass through a lamp or any appliance which causes resistance before they return to the negative terminal through the positive side. When it comes to AC, the electrons are pulled and pushed periodically leading to the creation of the alternating current.

The method of pulling and pushing the electrons resembles the working of a car engine. When the coils of wire spun through a magnet, the generators create AC electricity. Different sources of energy can turn the handle of the generator leading to the generation of AC. For example, you can use diesel, gas, nuclear, hydroelectricity, wind, coal or even solar energy to turn the generator.

The U.S chose AC electricity for general consumption from the grip because it proved to be less expensive during transmission over long distances. Solar panels create DC electricity.

To get the DC electricity from solar panels into the AC grid, an inverter should be used. An inverter is a simple device which has made it easy to convert the DC generated by solar panels to AC electricity which can be used just like the energy from the grid line is consumed.

What Does a Solar Inverter Do?

The solar inverter converts the DC electricity from the solar array and uses the power to create AC electricity. Apart from inverting DC to AC, the inverters also provide the ground fault protection.

The inverters also provide necessary stats such as Voltage, maximum power tracking, and energy consumption. Central inverters have been used in the solar industry from the beginning. But, the introduction of micro-inverters made a great shift in the PV industry.

When a central inverter is applied, a fault in one unit such as being under the shade can affect the energy production of the other units. Micro-inverters allow each solar array to perform to its best. Even if one solar panel has an issue, the micro-inverters make the rest to work efficiently.

How a Solar Panel System Works

The solar system works in such a way the sunlight will hit the solar panel on the top of your roof then the panels will convert the energy from the sun to a DC. The DC then flows through an inverter. It then converts the electricity from the DC to an AC. The AC can be used to power the home in running different home appliances. The energy is simple to generate and clean.

Related article: 7 Simple Steps on How to Build Solar Panels

What is Solar Energy? The Conclusion

Due to improvements in technology, the solar energy is becoming clean and even affordable. Solar panels generate electricity during each sunny day. You may not be at home to consume the energy on a regular basis.

In some cases, your solar panels may not be in a position to generate power in the real time when you need it. The net metering allows you to benefit from the energy generated even if you do not consume it to competition. The metering is a grid-tied PV system which allows excess energy which you generate is fed to the national grid.

Other users can consume the energy elsewhere as you benefit from the credit created. The credit you get from allowing other people to use the solar energy produced in your system can be used to pay for electricity from the grid system when you need it.

The net meter allows you to record the energy you send to the grid and the one you will receive at night when you are unable to generate the solar power. It allows you to reduce your electricity bills drastically. Learn a step-by-step course that teaches you how to lower your energy bills and become more energy independent and self-sufficient by constructing your own power at home with professional quality solar panels and residential wind turbines called DIY Home Energy System by Jeff Davis.