As we all know that Diwali is coming very soon, so the demand for firecrackers is going to shoot up.

And since everyone is going to burst crackers, air and sound pollution will also increase, and this is going to affect the environment badly.

The government has officially taken certain measures to prohibit the use of chemical firecrackers by law and has allowed only Green Crackers or eco-friendly crackers to be used.

What are green crackers?

As a result of increasing pollution from bursting crackers, it became a serious concern, so the government took extreme measures to ban crackers, but it still didn’t work the way they expected.

So the Supreme Court in October 2018 relaxed the cracker ban by allowing the bursting of low-emission crackers.

The National Environment Engineering Research Institute (NEERI) researched and developed Green Crackers, a type of crackers that doesn’t contain any harmful chemicals that may harm the environment.

It means less air pollution and is eco-friendly to the environment. Not only air pollution, but also it has limited the sound effect by 110-130 decibels compared to a normal cracker that has more than 150 decibels.

Because of this very reason, for a few years everyone is thinking about Green Crackers during every Festival that we celebrate, especially Diwali.

Although green crackers aren’t 100% safe, they still emit gaseous compounds when combusted. So if you think that they are completely safe for children then you are mistaken.

The traditional cracker is 30% less polluting than these crackers, which significantly reduces pollution.

These Crackers made of less harmful raw materials, and they have a smaller shell size compared to traditional crackers.

They also contain additives that help to reduce emission by suppressing dust.

The best thing about green crackers is that they don’t contain banned chemicals like barium, lithium and lead.

There are three types of green crackers they are called Safe Water Releaser, Safe Thermite Crackers and Minimum Aluminum Crackers.

They have different compositions but work the same. Safe Water Releaser when burst releases water vapor and doesn’t allow dust particles to rise in the air.

The other two types are made using safe chemicals so usage of harmful chemicals like potassium nitrate, and Sulfur are avoided and in addition to this to further limit the use of toxic chemicals magnesium is used in place of aluminum.

The main objective is to reduce usage of harmful chemicals and reduce particulate matter disposal and reduction in sound compared to traditional crackers.

Are they helpful for Environment?

Many states of the Indian government say that the materials used to make green crackers have reduced the impact of 30% of the environment and are also considered less harmful compared to normal firecrackers.

But the question arises whether this 30% is enough? And what about the rest of 70% pollution that is still polluting the environment.

Environmentalists believe that this 30% reduction is not going to have a lot of impact on the overall pollution level and green crackers is not a remedy to the cause of air pollution.

This will only reduce the release of toxic gas to some extent, the permanent solution will be a complete ban.

Normal Firecrackers are made of harmful chemicals such as black powder (gun powder), which contain charcoal, lithium, and arsenic, chromium and other harmful chemicals with a fuse is used to light the powder and the material used in firecrackers have aluminum in addition to charcoal that helps in the explosion glow brighter.

Firecrackers are banned in Delhi and few other states in India. And in other States the window for bursting crackers has been limited to only 2 hours and has allowed only green crackers.

So in these states, there are no chances of bursting traditional crackers; they have only a chance of bursting green crackers.

In other states where there is no restriction on bursting of crackers from the Central Government, state governments have instructed police patrols to restrict bursting of high decibel crackers.

Because of this price difference people are still considering buying normal crackers instead of green crackers.

But those who care about the environment and care about the well being of others will still go for green crackers instead of normal crackers even if they are high priced.

So we can see that there is not much of a difference between the two types of crackers but when a better alternative is available in the market then people should avoid buying harmful crackers.

Why should you use them?

In Every festival we use firecrackers such as Diwali, Christmas, Halloween, New Year and every cultural program celebrated around the world.

We use crackers constantly, and if we use conventional crackers all the time, then the pollution level will go up dramatically.

So the only solution is to use green crackers instead of traditional ones. This way everyone can enjoy bursting crackers and the pollution level will also be in check.

Those places where the pollution level is already very high should avoid non-green crackers at all cost. Places like Delhi that already have high pollution level Government has banned use of traditional crackers.

The below graphs published by AQI.in shows the air quality index (AQI) of Delhi during Diwali in 2021. It shows how on Diwali alone the level of pollution rises because of the extensive usage of fireworks. 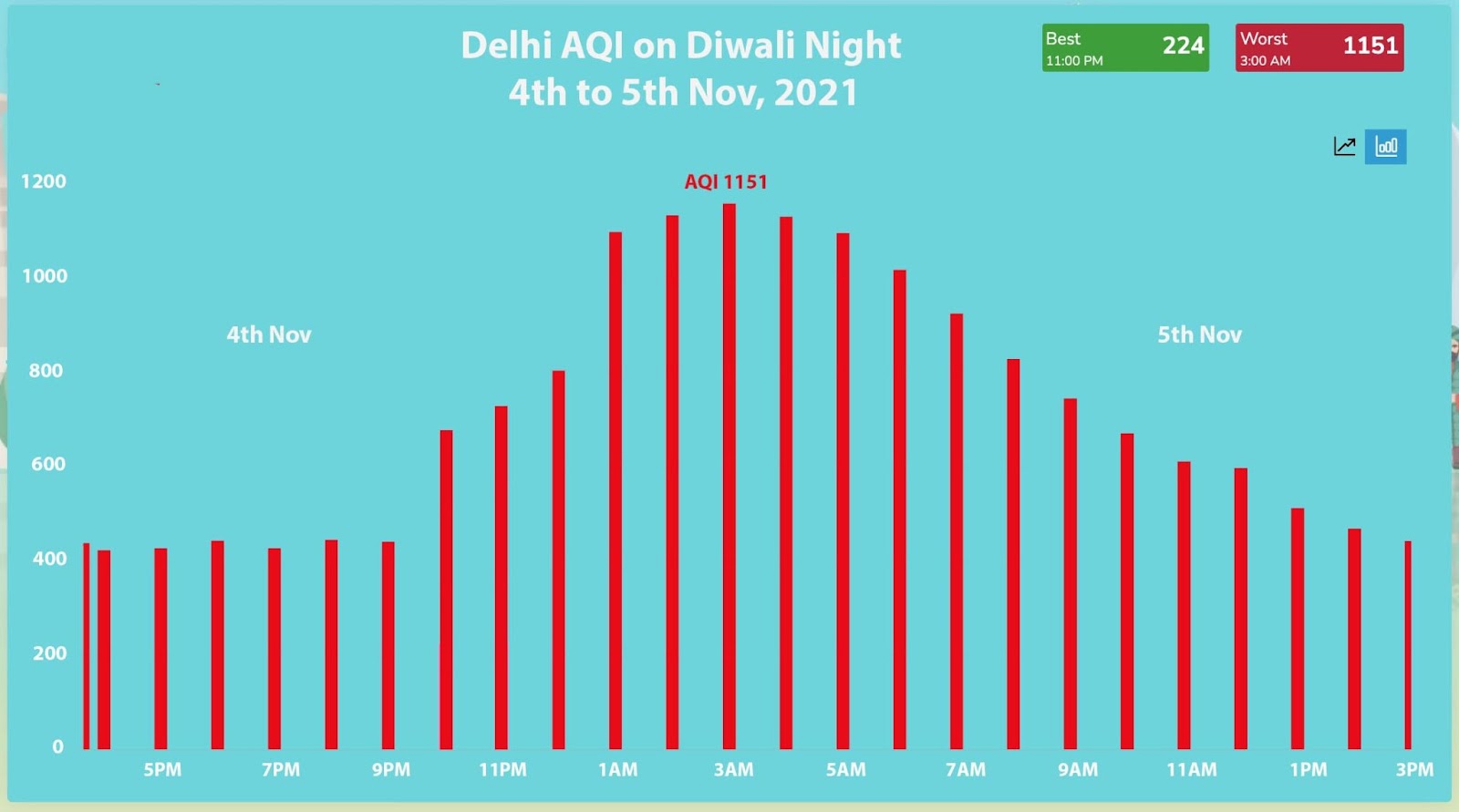 Diwali or any other festival is incomplete without beautiful fireworks, so everyone is going to burst crackers, even some wedding ceremonies end with a series of fireworks.

If everyone starts using green crackers then everyone will be able to burst crackers and enjoy fireworks without thinking much of the environment.

So it is wise to use green crackers whenever possible as it will be beneficial for the environment and for others also.

How do you identify a Green Cracker?

The only way to identify a Green Cracker is by looking carefully at the body of the boxes.

Green Crackers can be identified using a green logo with CSIR NEERI written on it, in addition to this some boxes also contain a QR Code that can be scanned to know the composition and other important information about the manufacturing of that cracker packet.

If any boxes don’t have any of these two identification on them then they are definitely fake, and you should avoid buying them and report them to the authorities.

Green Crackers are helpful to the people who have breathing problems or lung diseases. Nowadays, the increase of air pollution and causes of climate change needs baby steps to be combated with.

The solution of these concerns is to use Eco-friendly or green crackers to contribute to a great effect. These small steps will add to solve the global problems.

Accordingly, Green Crackers are not the best solution to pollution concern, but as of now, this is the only solution available.

We should therefore utilize the only solution we have to the fullest and reduce pollution in the environment.

Source: https://solarfunda.com/green-crackers/
We use cookies to ensure that we give you the best experience on our website. If you continue to use this site we will assume that you are happy with it. Ok